Stress Induced Cracks
MAN is proud to be one of the few contractors that has successfully applied advanced methods and measures for monitoring and controlling stress induced crack formations in mass concrete for several large scale projects.

MAN is proud to be one of the few contractors that has successfully applied advanced methods and measures for monitoring and controlling stress induced crack formations in mass concrete for several large scale projects such as Beirut Terraces, Sama Beirut, Crédit Libanais Headquarters and Sky Gate. 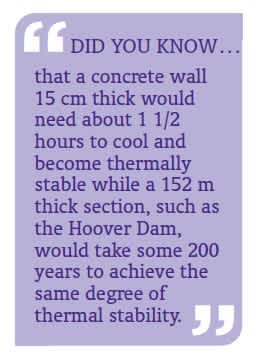 By applying the methodology and recommendations stated in ACI-20, along with field experience, the inhouse team of engineers is able to predict the behavior of almost any mass concrete columns and mat foundations, thus determining the required measures needed to avoid high temperatures and excess heat differentials due to heat dissipation. If not controlled, it may lead to the formation of micro-stress-induced cracks during and after the pouring activity.

As the interior temperature of mass concrete rises through heat of cement hydration (due to the reaction taking place between cement and water), the outer concrete surface may cool and contract at a different rate than that of the core (refer to figure 1). In this case, three constraints must be monitored.

First constraint: If the temperature difference exceeds 20 degrees between any two points within the structure, then the section may be subject to cracking.

Third constraint: The duration of the time required for the concrete to gain its thermal stability.

In order to ensure that all constraints are kept well within acceptable limits and in-line with project specs, the design team analyzes temperature variations in the mass concrete structure according to ACI-207. Based on the results, several recommendations are given to the site team in terms of a) the required thickness of surface insulation, b) the type of cement and optimal cement content that should be used, c) estimated peak temperature and when it is expected to occur, d) necessary curing and gradual cooling methods, e) possible location of thermocouples for measuring real time concrete temperatures. 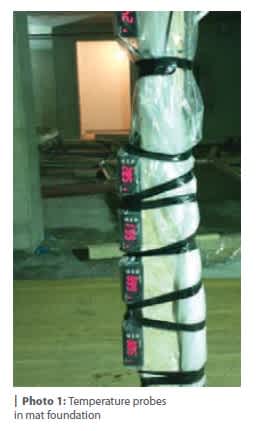 As shown in Photo-1 from one of MAN’s sites, several readings are taken from varying depths in the mat foundation.

Following the pouring, and after registering the temperature of the freshly delivered concrete, the site team arranges to insulate the surface of the mat foundation (Photo-2.) or columns such as the massive 2 meter diameter columns encountered on the Credit Libanais project (Photo-3.). 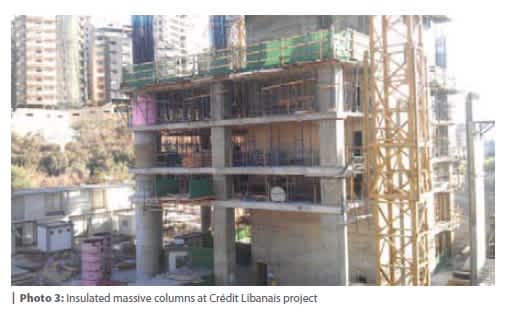 Insulation is essential in order to keep the temperature differential within acceptable limits between the surface of the concrete and the outside ambient temperature. Otherwise, this violates the first constraint. 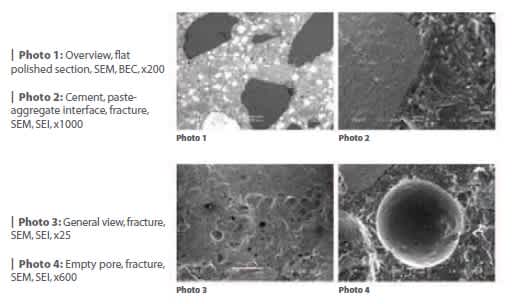 On the other hand, the insulation cannot be kept permanently as it will then contribute to the increase of temperature which would rise due to the chemical reaction taking place. This would violate the second constraint. This is why careful and diligent ventilation and curing are required. This occurs by temporarily removing alternate insulation sheets and returning them periodically. 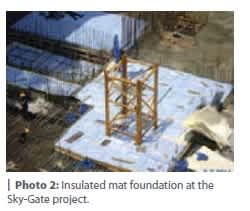 Ventilation and curing are continued for as long as needed until the concrete has attained thermal stability and this concludes the process of limiting stress induced cracks in mass concrete.