PROJECT EXECUTED; EQUIPMENT AND WORK METHOD MAN Enterprise has executed 393 linear meters of 1800 dia jacking pipe, 1,065lm of 2,000lm dia pipe, and 412lm of 2,600 dia pipe at an average depth of 10m in the Education City Qatar Foundation Project. These pipes collect all the storm water from the north side of Education City. 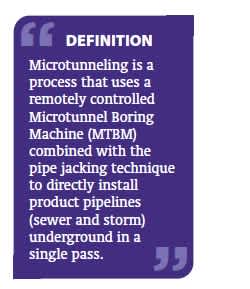 Microtunneling requires jacking and reception pits at the opposite ends of each drive. Shoring will be provided in the jacking pits in case the natural soil is not stable and an appropriate dewatering system should be installed to keep the pit dry from water.

The following must also be included in the project plan: - The front wall must be casted in the jacking pit for pipe guidance MTBM sewer lines to be installed in 150mm blinding matched to the expected subsurface condition and the pipe diameter to be installed - A hydraulic jacking system to jack the pipeline with a closed loop slurry system to remove the excavated tunnel spoil - A slurry cleaning system to remove the spoil from the slurry water - A lubrication system to lubricate the exterior of the pipeline during installation - A guidance system to provide line and grade control, an electrical supply and distribution system to power equipment, a crane to hoist pipe section into the jacking pit, and various trucks and loaders to transport spoil off site

Additionally, the MTBM has in-line cameras to relay information to the operator and a target system for guidance control.

Precise control of line and grade is accomplished using a guidance system and steering jacks to locate and steer the MTBM during a microtunneling drive. The guidance system typically consists of a referenced laser mounted in the jacking pit, which transmits a beam onto the target mounted inside the articulated section of the MTBM. This and other operational information is transmitted through wire cables to a control cabin located on the surface. Microtunneling machines are capable of independently counterbalancing earth and hydrostatic pressures. Earth pressure is counterbalanced by careful control of advance rates and excavation rates of spoil materials. Ground water pressure is counterbalanced by using pressurized slurry in the soil mixing chowder of the MTBM. 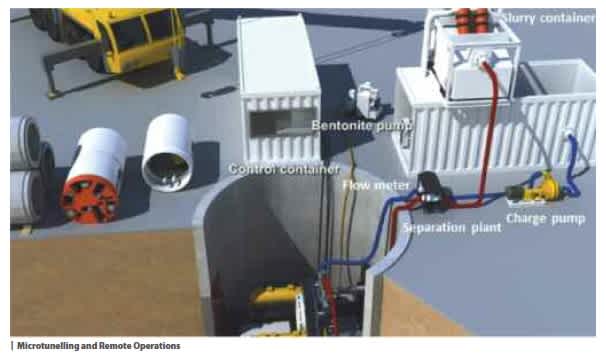 When the drive is completed, ground injection will start to fill the gap between the pipe and the soil using nozzles installed inside the jacking pipes. 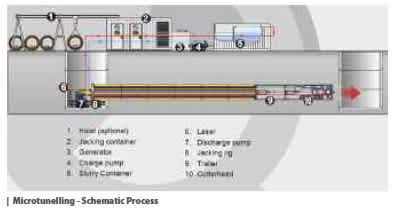 DURING EXECUTION During the jacking of the 2000 dia pipe, a very hard rock was discovered and the MTMB machine barely pushed the pipe 20cm in 6 hours which lead to the damage of the diamond head. In case of similar damage, the technician can easily access the rotated head inside the tunnel and replace the damaged diamond heads with no major efforts or losses. 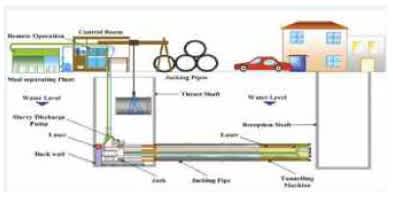 LESSON LEARNED Based on experience, it is necessary to continuously and closely monitor the alignment and level during drilling. The misalignment and deviation in levels will cause gaps in the joints which lead to water leaks inside the tunnel pipe.